Raising Some “Hell on the Border” in Birmingham, AL


As Birmingham continues to make a name for itself in the film industry, and with the support of Film Birmingham, more and more directors and producers are turning to the Magic City as a great filming locations for their work! It’s no longer uncommon to spot a Hollywood celebrity walking around downtown or checking out the local cuisine at one of our many famous restaurants.

I had a chance to catch up with the crew filming "Hell on the Border.” I got to ask them about the film, the cast, and what they enjoyed most about filming in Birmingham! Since “Hell on the Border is a western, a lot of the filming was done on-site at Tannehill State Park and the surrounding area. 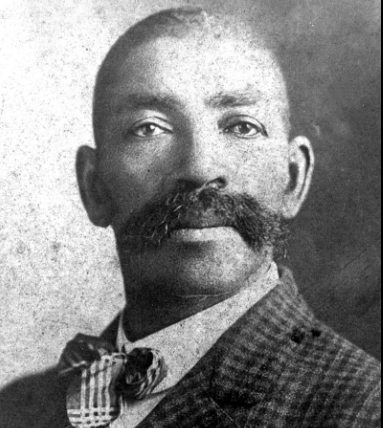 
A little background first. “Hell on the Border” tells the story of **Bass Reeves**who was the first black deputy U.S. Marshal west of the Mississippi River! It is widely believed, though often debated, that Reeves served as the inspiration for The Lone Ranger! Despite the debate on this specific issue, everyone agrees that Bass Reeves’s legacy is MUCH greater than inspiring a fictional character. Reeves was born into slavery, but after being freed by the 13th Amendment he became a U.S. Marshal who arrested 3,000 criminals, and killed 14 other outlaws! This is a tale that definitely needed to be told and the city of Birmingham got to play a large part in bringing this tale of the Wild West to the big screen! 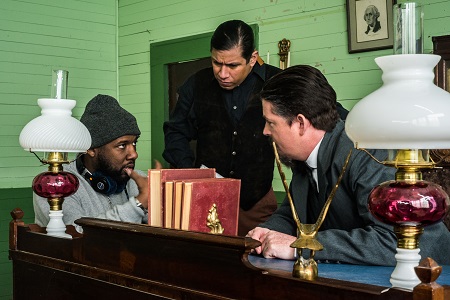 *
Getting some direction between scenes.

I spoke with director Wes Miller, and producers Curtis Nichouls and Leo Ohaebosim. You may know them for their recent work on the 2018 film River Runs Red starring Taye Diggs and John Cusack. I asked them about the film and their experience in the Birmingham area. 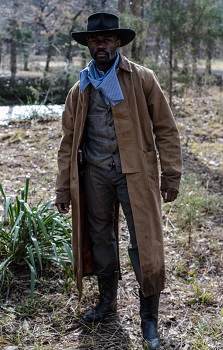 Happenin’s in the Ham: So who are the stars of this new film and how many cast members and extras where there?


Leo Ohaebosim: The leads are David Gyasi, Frank Rillo, and Ron Perlman. We ended up having a cast of 85 when you consider extras as well. 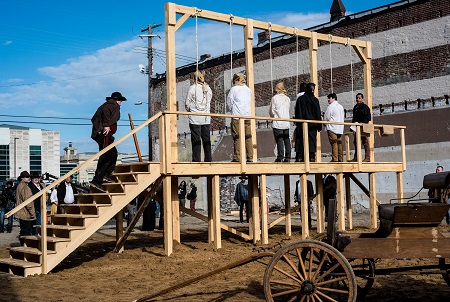 What's a Western without a hanging?

HITH: What would you say is the main theme of “Hell on the Border”?


Wes Miller: The film tells the story of Bass Reeves who was born a slave and then became a U.S. Marshal and the inspiration for the Lone Ranger. The main theme of the film is one of brotherhood and friendship. 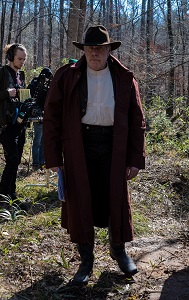 Ron Perlman in his hat and duster

HITH: What made you decide to film in the Birmingham area?


Curtis Nichouls: The main reason was the great tax incentive that was available. The area is also filled with such welcoming people. The staff at Tannehill and the City of Bessemer were great to work with. 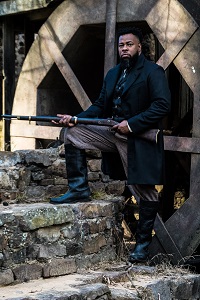 HITH: Were you able to get an old West look fairly easily?


Nichouls: Yes. We had plenty of people willing to volunteer to help. There were plenty of Civil War Reenactors who did a great job. We scouted locations for a month and the people were a big factor in where we decided to film. We were able to find all the locations we needed within an hour’s drive of Birmingham.


HITH: Were there any specific people who stood out?


Nichouls: We stayed at the Hyatt in Hoover and the General Manager actually portrays General Grant in the film! We truly had a great cast and I believe that David Gyasi will quickly become a household name. 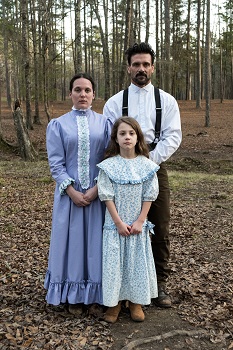 Frank Grillo who you may know from Capt. America

HITH: Are there any other projects your team is working on?


Curtis: We are in pre-production for the film “The King” which will be an international action thriller! Think MMA fighting meets “Taken.”

HITH: Where will you film “The King.”

All: We are narrowing it down, but we all would love to film in Birmingham again!


HITH: Well thanks for the interview! We look forward to seeing “Hell on the Border” and hope that you’ll return to Birmingham soon!

“Hell on the Border” just wrapped filming and is now in post production. You can look for it around Thanksgiving. “River Runs Red” is out now and, hopefully, filming on “The King” will begin in Birmingham soon!