Ven. Geshe Lhakdor, Translator to the Dalai Lama, is Coming to Birmingham!

This Tuesday, March 28, Ven. Geshe Lhakdor will be speaking at UAB's The Edge of Chaos. Lhakdor has served as translator to His Holiness The Dalai Lama since 1989, is a trustee of The Foundation for Universal Responsibility, and is head of the Science Education Project at The Library of Tibetan Works & Archives where he serves as Director.

It's one thing to check Instagram for some #morningmeditation, but how often do you get to start your day by speaking with a renowned Tibetan monk who's both a scholar and right hand man to The Dalai Lama?!


I had the privilege of speaking with the Venerable Geshe Lhakdor about his upcoming trip to Birmingham, his work with the the Dalai Lama, and the meeting of ancient Tibetan philosophies with modern Neuroscience.

I had no idea what to expect from a phone call with a Buddhist monk, especially one that holds such a prestigious position. You see, "Geshe" translates to "virtuous friend" and is a degree achieved by the most dedicated Buddhist monks. Millions of questions were running though my mind, but I wanted to focus on the subject of his current travels. I quickly learned that any conversation with a Buddhist monk, no matter the topic, is going to be loaded with phrases and life lessons that you will want to apply to every detail of your daily life!

Before we launched into deeper subject matter, I wanted to ask about a typical day in Geshe Lhakdor's life when he isn't traveling the globe.

Happenin's in the 'Ham: What is your typical day like?

Geshe Lhakdo: Generally I get up around 5:30, make a nice cup of tea for myself, and have some meditation. From 9-5 I go to my office at the Archives where I have my regular work. After work I come back to my room do a little bit of meditation, or do a little reading from a book.

(This seems like the work day of an average scholar until you understand the kinds of texts they keep at the archives.) 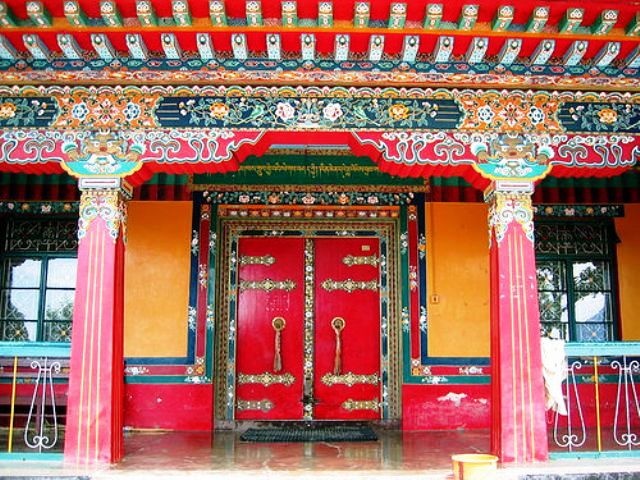 HITH: Can you tell me about the Library of Tibetan Works & Archives?


GL: After coming into India and escaping Tibet, some of the Tibetan individuals and monasteries tried to take out some of the most rare and important old texts and give them over to His Holiness the Dalai Lama. His Holiness the Dalai Lama opened this institute saying the text and the other important artifacts must be preserved and should be available for visitors and the public to see because they appreciate those things.
They have a lot of old scriptures, also. (He mentions one that is from the 12th century!)
Many are written by hand, you know, and some of them are written in gold and silver. Just from that you can see just how much respect and importance that has been given to this holy text and scriptures.


(Many of these texts and artifacts barely escaped destruction and came very close to being lost to history.)


![The Dalai Lama Receives Nobel Peace Price Credit: dalailama80.org](https://s3.amazonaws.com/happenins-in-the-ham/2017/03/Nobel-for-DL.jpg) **HITH:** I hear you work with the Foundation for Universal Responsibility. Can you tell me how the Foundation came to be?


GL: The Foundation of Universal Responsibility is actually a foundation that was started from the money given to His Holiness the Dalai Lama when he got his Nobel Peace Prize. He said that the money should be used to start a foundation which carries on the activities of universal responsibility. It’s based in New Delhi. I’m just a trustee there.


(At this point I think to myself, "JUST a trustee?!" Talk about humility! I think I framed my Vulcan Junior Board acceptance letter. I DEFINITELY posted about it on Facebook.)


HITH: I know you speak a lot about the pitfalls of inaction. I know for Birmingham and other cities trying to better themselves there seems to be a disconnect between the amount of talk about what should be done and the amount of work that actually gets put into making positive change. Do you have any advice on this subject?


GL: Normally, I tell people that it is not enough to talk about things, to talk about the problems of the world, or your community. What is important is action, because action, I strongly believe, speaks louder than words. That’s very important.

It’s also important to focus on, I call it, recharging yourself. Just like when we go into darkness where we need to use the flashlight, it’s important to charge it properly otherwise there will be no light left when you go into the darkness. Similarly, you need to also recharge yourself, whether it’s through inner contemplation, meditation, or whatever name you give it. It’s important to plan and to think properly. Once you are sure what you are going to do is useful, then you should just act.


(This statement immediately conjured up thoughts of how I'm always having to make sure my cell phone is charged up for "the next event" while I'm usually running with my own mental, physical, and spiritual tanks on E. I'm already learning so much from this call.) 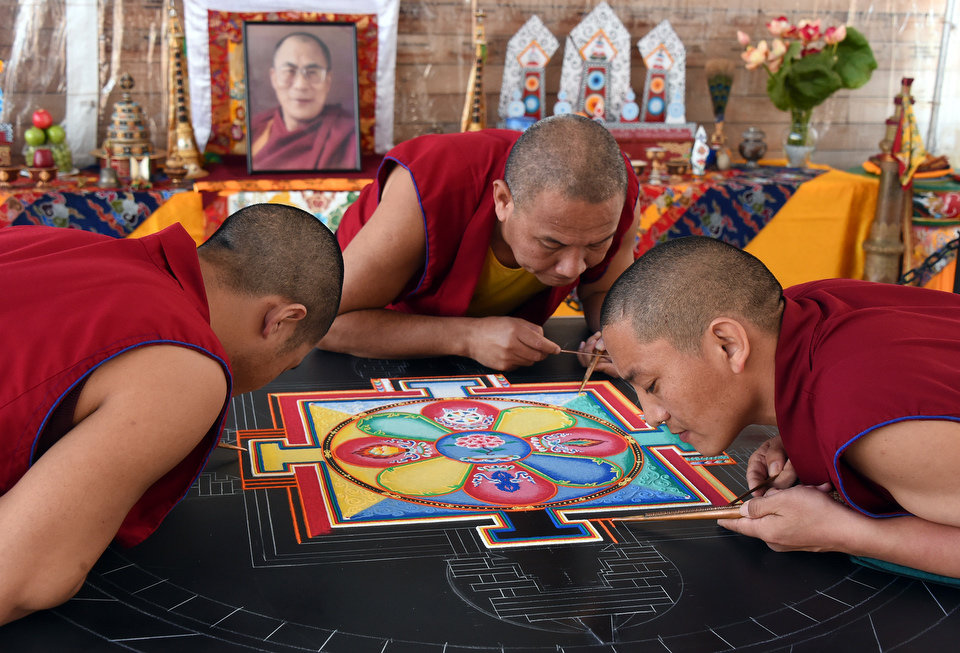 HITH: Is there a primary topic you are focusing on during this trip?


GL: Basically I have given many talks and classes, like yesterday, where I was on a panel and we were talking about the importance of the combining of the head and the heart. So that means you should have love and compassion for everybody, but that it must not be based on ego; it must be based on the correct understanding of the situation, or the reality.

Many a times we really don’t pay much attention about the reality. We are not realistic and it’s because of this lack of knowledge of what is happening around you. Despite our trying to experience love and compassion, it becomes biased, so it’s really important that we have a holistic picture of the reality. I’ve been talking on things like that.


(At this point I'm wondering if "there is no spoon" or if I "took the Red Pill" for breakfast. Mind blown!) 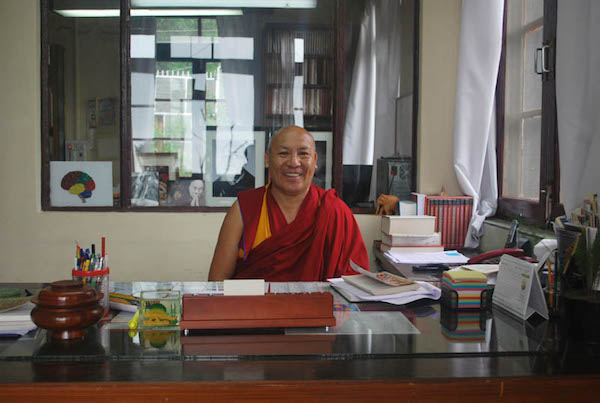 HITH: How do you view the split between Science and Religion when it come to the mind or brain?


GL: In Buddhism, when we talk about the human mind or spirituality we can clearly talk about the importance of the role played by mind. Then there are those who do not believe, or who do not have a correct example or evidence right now.
For example, the scientists can talk about the mind which is totally different or separate from the brain. They will explain the same thing, but from the functions of the brain. So, there is a very close correlation between the two. The word you may use might not be the same thing, but what’s important is whether you can train your mind and train your brain to be better. Now from both the Buddhist perspective of training the mind and the scientific perspective of the neurological functionings, we are all now coming closer to saying "yes we can improve and do better." That is always good news!


HITH: Is there anything you particularly look forward to when traveling to various places?


GL: No, I’m not particularly looking for anything in a particular place. I always feel it is very important to devote a feeling of sameness to wherever you go. Sameness in the sense that we all want happiness and do not want suffering. How much happiness we can experience or how much interaction of suffering we have is not so much dependent upon the external material facilities, but it is primaraliy dependent upon your mental perspective.
So, it’s important to cultivate a mental perspective which is all embracing, which thinks about the interconnected reality and things like that. I’m fond of sharing these things with people who are interested.


(I've always approached new places with the objective of getting something unique and new out of them. It could be good or could be bad. This was a philosophy of seeing everything through a positive lens which I'm sure does wonders when going though airport security.) 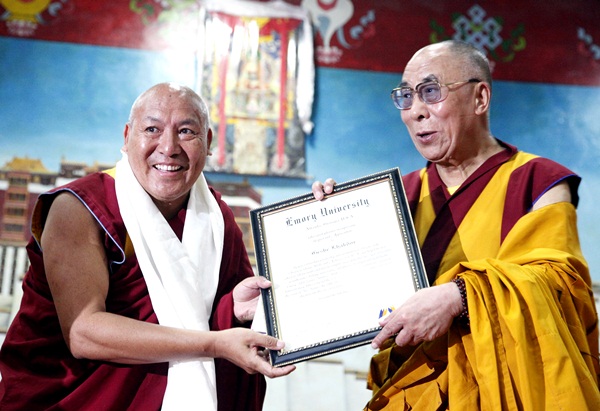 HITH: Any advice for those of us who are addicted to our smartphones and a lifestyle of instant gratification?


GL: I think what is important is that whether it’s religion, politics, or an iPhone, if you use them as facilities for doing good things like connecting other people, they are all good things. But, if you stretch beyond your need while appreciating some of this modern technology, if you forget that your service is the most important thing, then that is the danger, you see.
If you misuse, then even religion and smartphones become distracting factors, not cultivating kindness. It’s really up to the individual. We need to see all this as facilities, meaning something to enhance or improve your life. There should be some type of moderation in everything that you do.


(Being an enthusiast of almost all things, I probably needed to hear this more than anyone else I know. It's not hard for me to find myself distracted by all the noise on social media. This was a great reminder that moderation in all things is key.)

Ven. Geshe Lhakdor will be visiting UAB's The Edge of Chaos on Tuesday, March 28th at 5:30pm. His lecture will begin at 6:15 pm. Please join us and get inspired!