Come have an EGG-cellent Time at the 3rd Annual Vulcan Drink & Drop!

Come watch crazy contraptions being dropped from Vulcan while you enjoy food and drinks!


![Vulcan Drink & Drop 2019](https://s3.amazonaws.com/happenins-in-the-ham/2019/03/Drink-and-Drop-Banner-.jpg)
On April 4th a crowd will gather at Vulcan Park & Museum to do something that is usually a big No No. Teams will be dropping creative contraptions, each housing a raw egg, off of Vulcan’s 124ft. high observation deck and onto the ground below! Will the eggs survive? Will the contraptions explode? The only way to find out is to attend the 3rd Annual Vulcan Drink & Drop! ![Vulcan Drink & Drop View from the Top](https://s3.amazonaws.com/happenins-in-the-ham/2019/03/20180405_161753.jpg)
*It's a LONG way down!*
The Vulcan Junior Leadership Board devised the Egg Drop three years ago to coincide with the Brent Newman Memorial Egg Drop that has been hosted by the **[UAB American Society of Mechanical Engineers](https://www.uab.edu/engineering/me/undergraduate/student-groups/asme)** for 30 years.! The Brent Newman Drop works to inspire engineering thought and design in young students and is a **[STEM](https://en.wikipedia.org/wiki/Science,_technology,_engineering,_and_mathematics)** activity. The adult version is like a traditional egg drop, but it happens at night and includes local beer, food trucks, live music and more! ![Vulcan Drink & Drop Teams](https://s3.amazonaws.com/happenins-in-the-ham/2019/03/20170406_184133.jpg)
*We've seen all kinds of contraptions!*

This year the event will have Eugene’s Hot Chicken and beer provided by Ghost Train and Interstellar Ginger Beer Co.! The music will be provided by JD and the Man. This is a 21 & up event that’s a great opportunity for networking and socializing.


Teams will compete for various categories like Best Laid Egg, Greenest Egg, Biggest Splat, and more! The trophies are Vulcan Bobble head/butt statues mounted on a piece of the original marble from the exterior of Vulcan’s pedestal! There are a few returning teams who will be fighting hard to defend their titles! 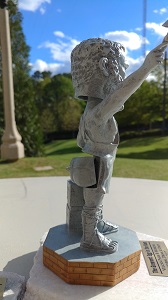 *BEHOLD! The Bobble Butt Trophy!*
If you’d like to register a team of 5 people to compete, the cost is just $100. A $10 admission ticket includes on drink voucher! You can purchase tickets **[HERE](http://visitvulcan.com/event/drinkndrop19/#.XJpH95hKjIU)**, or get a form to compete **[HERE](http://visitvulcan.com/event/drinkndrop19/#.XJpH95hKjIU).** ![STONE had a great device!](https://s3.amazonaws.com/happenins-in-the-ham/2019/03/20180405_170412.jpg)
*This device exploded into 1,000 pieces!!!*
I have had the pleasure of serving on the Vulcan Junior Leadership board since the beginning and am very excited to be involved with this event! You don’t want to miss out on the action! Get creative and prepare to have an egg-cellent time!
-Russell H.