One of the many things Amber and I love about Birmingham is that there always seems to be a new restaurant to try. At times it can seem overwhelming, but it’s a great sign of how hungry our city is (pardon the pun) for new and unique takes on food. Birmingham’s food scene is constantly evolving in both its offerings and atmospheres. Even as bloggers for **[Birmingham Restaurant Week](http://www.bhamrestaurantweek.com)** we still fall behind when it comes to trying new restaurants. Just when you think you’ve tried it all you discover a new culinary venue to explore! ![EastWest Birmingham Tiger Dragon Mural](https://s3.amazonaws.com/happenins-in-the-ham/2017/10/20171010_183356.jpg) **[EastWest](https://www.eastwestbirmingham.com)** opened their brick and mortar location this past 4th of July weekend after operating as a pop-up around the city. With our packed out festival season we didn’t have a chance to try them right when they opened. The second we had a moment to relax we jumped on the opportunity to visit Birmingham’s newest **[Pan-Asian](https://www.slideshare.net/faizankazim9/pan-asian-cuisine)** / **[Asian-Fusion](https://en.wikipedia.org/wiki/Fusion_cuisine)** restaurant. To be honest, I hadn’t done any research prior to this visit. I hadn’t read any reviews, so I had no idea what to expect. We were not disappointed! ![EastWest Interior Shot](https://s3.amazonaws.com/happenins-in-the-ham/2017/10/9-798A0512_3_4_5_6_7_8.jpg)

When we arrived at 6:30 the sun was already setting. One of the first things we noticed, other than an amazing mural of a dragon and a tiger, was that EastWest has a candle lit atmosphere. One side of the ceiling is decorated with round paper lanterns which, combined with the red candles, bathe the wooden tables in a soft pink glow. 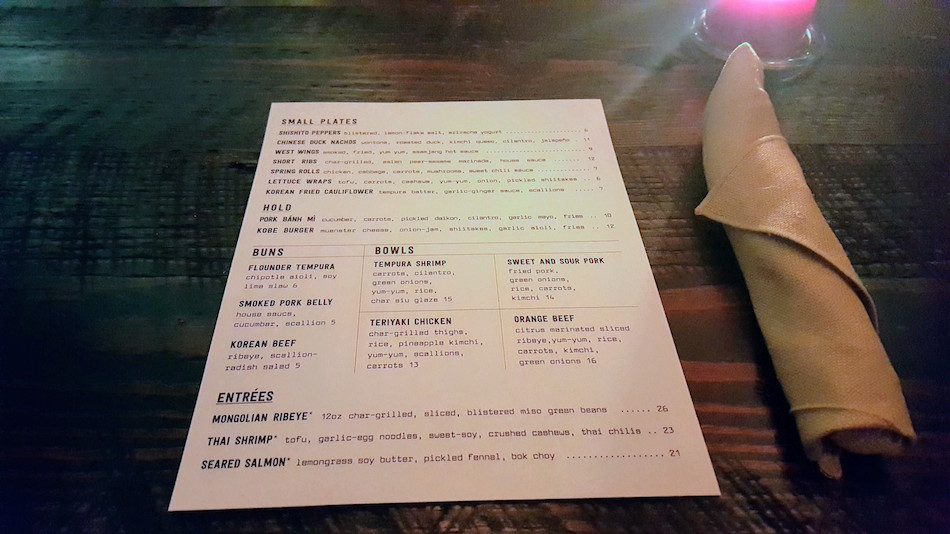 After being seated, our server, Max, greeted us and went over the menu. Personally, I think EastWest has the perfect sized menu. It provides plenty of options, but isn’t overwhelming. (I’m not a fan of menus that look like they were written by George R.R. Martin. I’m looking at you, Cheesecake Factory.) Max recommended that we begin with the Chinese Duck Nachos. Based on his enthusiasm we weren’t about to disagree. And thus began what can best be described as a culinary pleasure cruise. 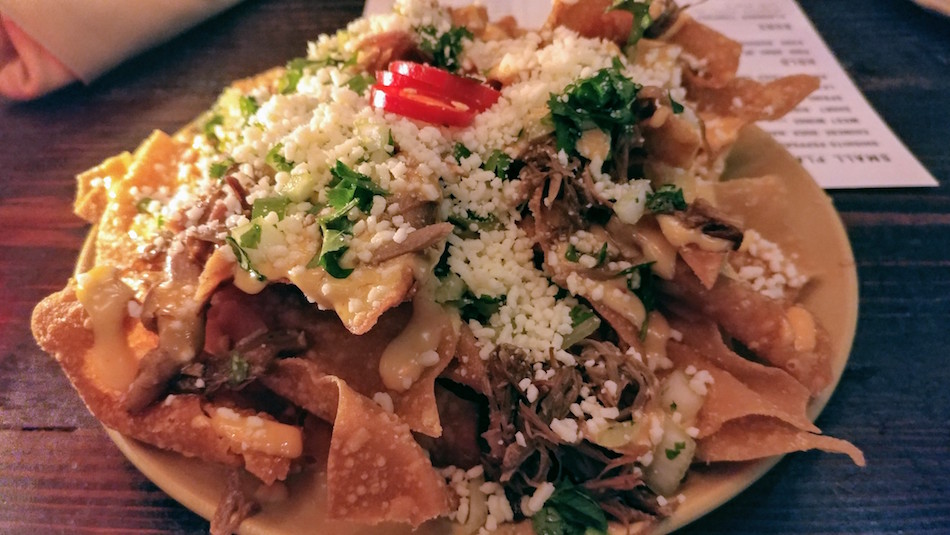 The Chinese Duck Nachos may be one of the best examples of Asian Fusion I have ever seen! The “chips” are actually fresh, crunchy, wontons topped with pulled roasted duck meat! Add to this a house made Kimchi Queso, jalapenos, a little cilantro, and you have one of the best appetizers in all of Birmingham! Amber had to remind me, more than once, that we had more food coming. It took all I had not to finish the whole plate! Each bite was the perfect blend of flavors and texture. I may be back to order this dish as a meal! 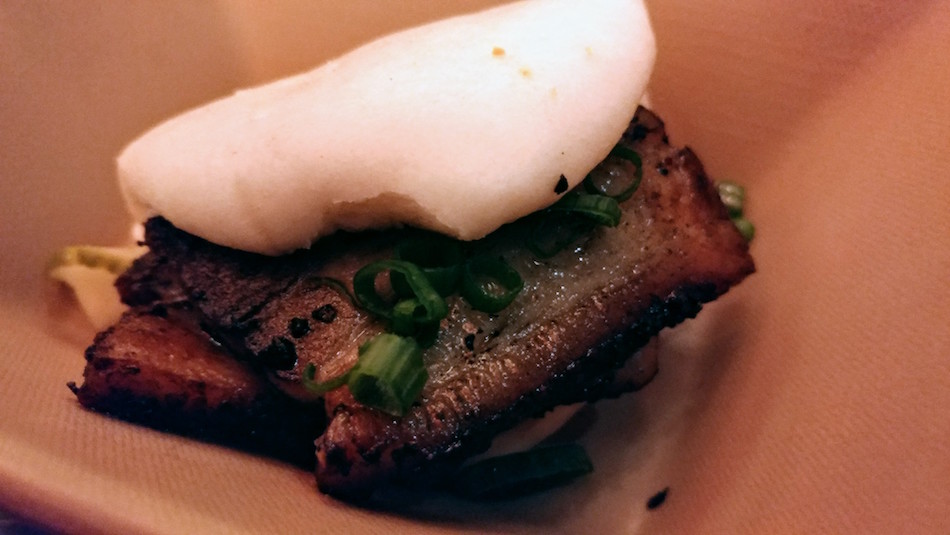 Another section of the menu features three different steam buns. We are HUGE fans of steam buns and were so happy to see them featured. We opted for the Smoked Pork Belly bun. Pork Belly is one of our favorite things because of how it holds so much flavor! Topped with a house sauce, cucumber, and scallions, this steam bun is simple but extremely flavorful! 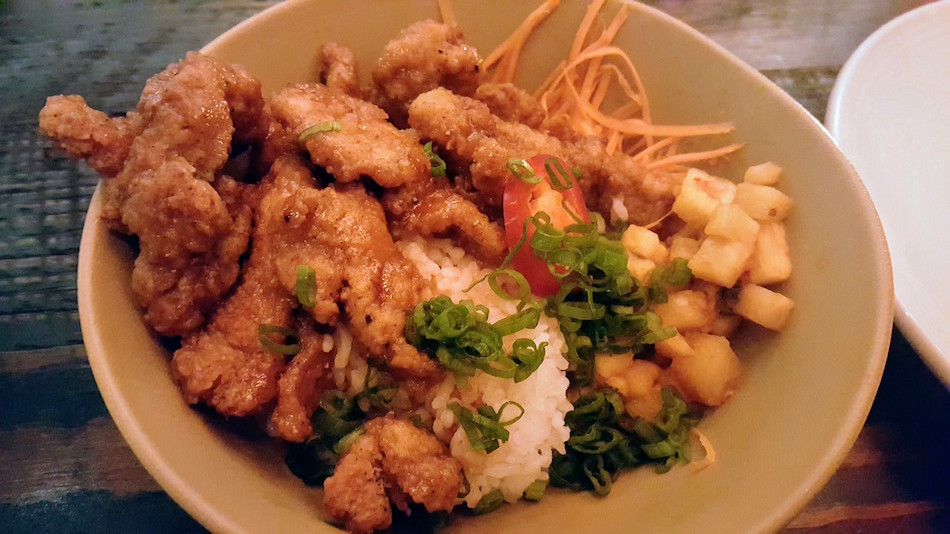 It was time to move on to the entrees! Because of how incredible the appetizers were, I could already see to-go boxes in the near future. The main courses are divided into two categories, Bowls and Entrees. We wanted to try one of each, so we started by ordering the Sweet and Sour Pork Bowl. The bowl features fried pork, green onions, carrots, pineapple kimchi, and rice. Being half Filipino, Amber is very picky about how rice is cooked (as one should be), but this rice did not disappoint! The pineapple kimchi was also on point with a nice kick of spice. I was thinking that the kimchi would steal the show in this dish, but the fried pork was not to be upstaged.


I’ve never had fried pork that was both this flavorful and tender. Had I not know what it was I might have assumed that I was eating veal. It was THAT soft, a far cry from the fried pork most of us are used to getting at Chinese buffets. We definitely recommend this if you find yourself debating on which bowl to try. You’ll be glad you did! 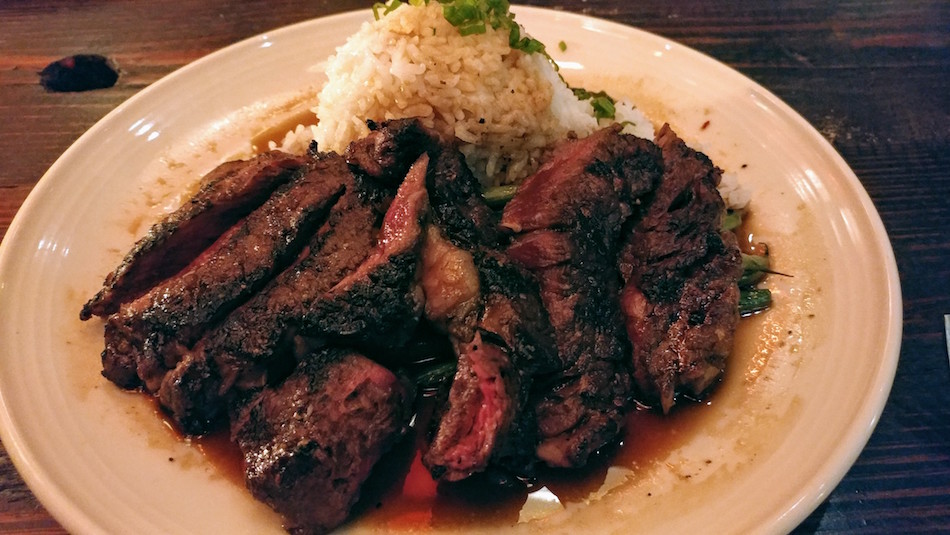 Under Entrees you’ll find the Mongolian Ribeye. The other options are a shrimp or a salmon dish which, while tempting, weren’t going to help my craving for red meat. I ordered the Ribeye medium-rare which is my normal go to at nice restaurants. I definitely made the right call! It comes sliced with blistered green beans and rice. The rice is great for soaking up all the juices from the meat.


I again find myself talking in superlatives, which I try to avoid when writing about food. However, this may be the best Ribeye I’ve ever had! Even Amber, who usually prefers seafood over steak, was amazed at how the meat seemed to melt in her mouth! I thought that I had gotten lucky with such a tender bite, but then I took another bite, and another. Each was just as tender and full of flavor as the last. Did I have leftovers? Sure. Did I make Ribeye biscuits for breakfast the next morning? You’d better believe it! Oh, and let’s not forget the tender green beans. They were also very tasty. 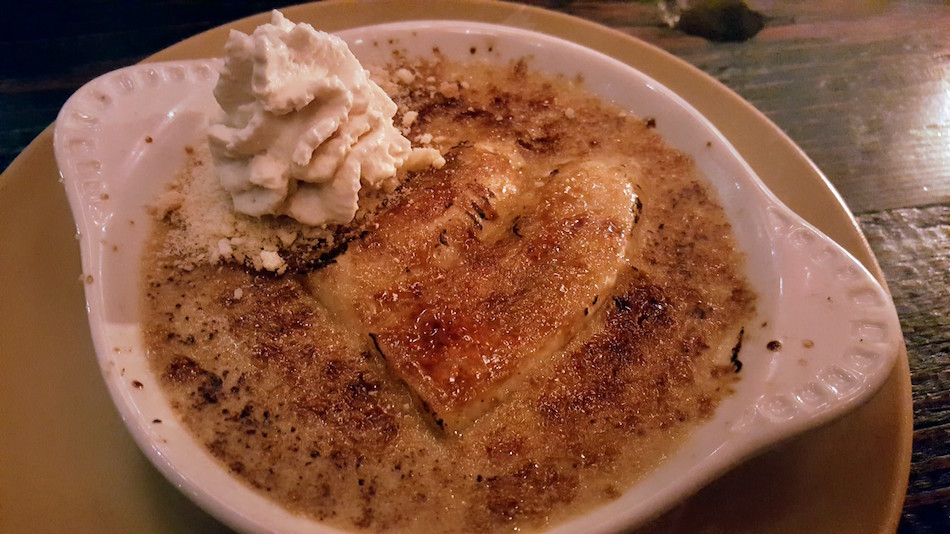 Just as I was about to wave the white napkin and tap out our server, Max, walked up and asked, “What would you like for dessert?” Dessert?! There’s dessert?! Far be it from me to pass up the last course, but I was pretty full. Not to worry, they have a Banana Crème brûlée that is both sweet and light! While Amber loves banana dishes, I often find the banana flavor overpowering. This was not the case here. The dish, topped with a sliced banana, had the perfect flavor. The crust tasted like the outside of a freshly toasted marshmallow! As if that weren’t enough, it is topped with an espresso whipped topping that is made in house. (Rumor has it that there may be some Urban Standard coffee involved in the whipping process.) While we had two boxes full of leftovers, we (ok, mostly me) devoured the entire dessert! 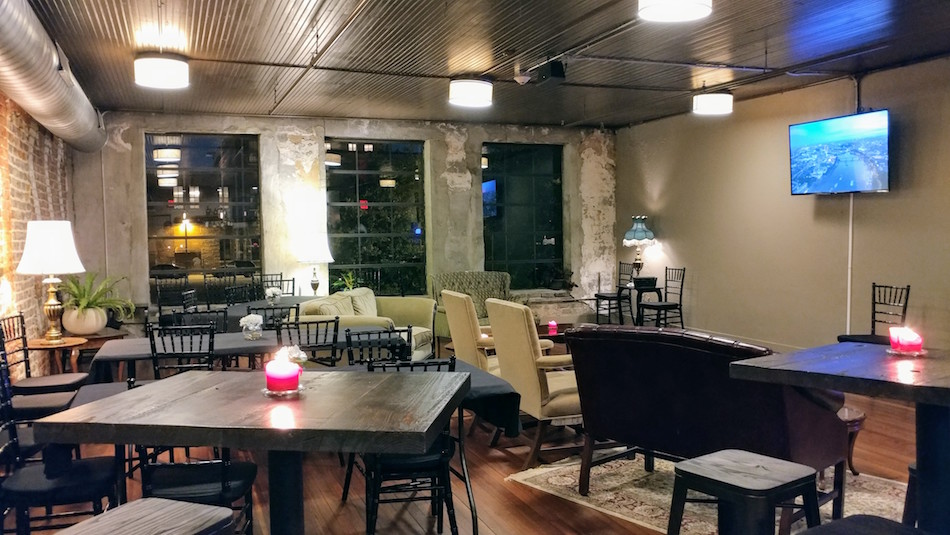 While we didn’t try any of the drinks ourselves, EastWest has a bar staff that have been trained by the mixologist from Collins Bar, so you know they are good! Another thing I forgot to mention is how fast our food arrived. Given the quality of each dish we were very impressed with the turn around time. EastWest also features an upstairs area that can be rented out for private events. Bell Media was hosting an event while we were there. The upstairs includes a bar, two flatscreens, and furniture for lounging. The owner offers the option of a buffet style meal, or a plated dinner for your guests! 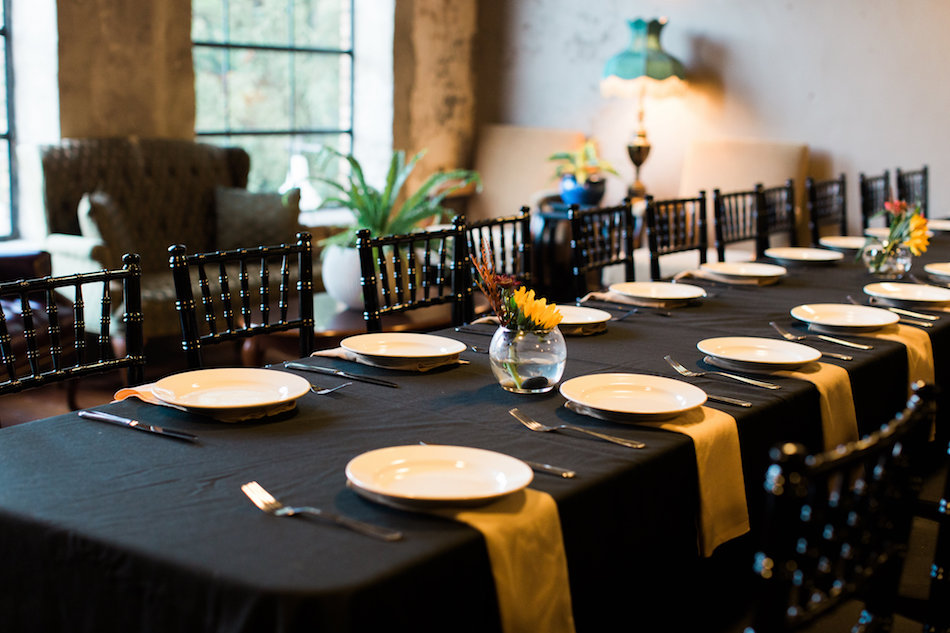 Speaking of the owner, you may be familiar with some of his work. Colby Conklin is no stranger to the Birmingham food scene. He was involved with both Chuck’s Fish and FIVE. Colby stopped by our table and spoke to us about EastWest. He wanted to bring a new concept to the downtown area and provide a menu that was different, but still straightforward. It’s obvious from speaking with him that he is not only passionate about food, but about the current growth in downtown as well! 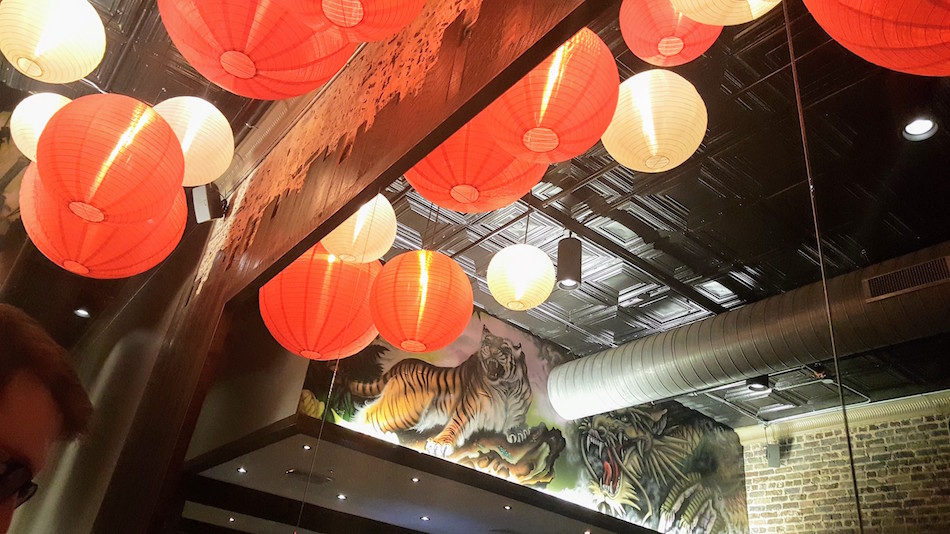 Amber and I had a wonderful experience at EastWest and it is now on our list of places to take friends who are visiting from out of town. It’s rare to find a restaurant that hits the mark in every step of the dining process from atmosphere, to service, to food. Do yourself a favor and try EastWest for yourself! Oh, and ask for Max! Tell him that Happenin’s told you that he should be your culinary tour guide for the evening.