Gourmet Pizza with a Unique Twist In Birmingham


There’s a new elephant in town. You might have seen her by the Rotary Trail. Her name is Irene and she’s the mascot for the new **[Pies & Pints Pizzeria](http://piesandpints.net)**! With the closing of **[Rocky’s](http://www.al.com/business/index.ssf/2016/02/rockys_pizza_announces_closing.html)** and **[Cosmos](http://www.al.com/entertainment/index.ssf/2016/02/iconic_birmingham_pizza_restau.html)**, downtown Birmingham lost two beloved pizza restaurants that had long served our community. When we saw that Pies & Pints, a West Virginia based restaurant, was moving in next to the **[Rotary Trail](https://www.traillink.com/trail/rotary-trail.aspx)**, we were cautiously optimistic about having a new pizza place downtown. After just one visit we were sold on the friendly atmosphere and delicious food! 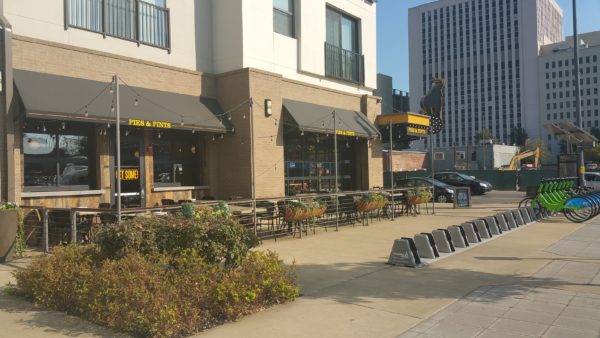 Pies & Pints started in Fayetteville, West Virginia in 2003 and as of now there are 10 locations. The original location was in an old saloon called the “White Elephant Saloon.” Upon restoring the building, a mural of a white elephant was found hidden behind a wall and was quickly adopted as the company’s mascot. You can see a replica of the mural in the Birmingham location. 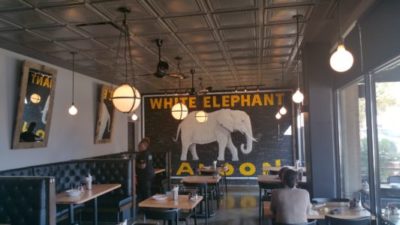 We were invited to visit by the manager, Samantha Dowdy, who walked us through a tasty tour of their menu as we talked about how Pies & Pints plans to become a staple in the downtown community. Sam told us that she moved here to open the location and has fallen in love with Birmingham. We’re pretty sure that Birmingham will quickly fall in love with these pizzas! 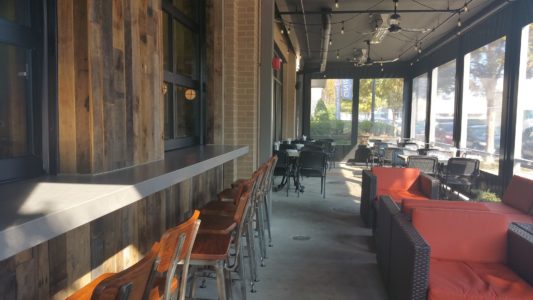 The first thing we noticed is that the location is expansive. There is plenty of indoor seating, an outdoor patio, AND a covered patio that is perfect for hanging out after work. It’s obvious that there was strong attention to detail when designing the layout. Be sure to check out the Birmingham skyline mural in the dining area. There is also a ZypBike station conveniently located out front in case you want to Zyp on over from Railroad Park!


Our meal began with some appetizers including nachos and wings. The nachos were piled high and could have been a meal on their own. They also make the perfect Instagram pic! 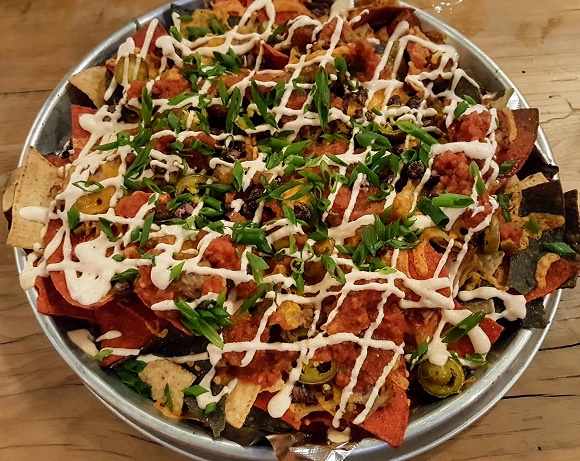 We are picky about wings, but these are dry rubbed & marinated in sriracha hot sauce, citrus, garlic, cilantro, and are grilled to perfection which should suit everyone’s taste. There’s no ranch, but they have a homemade gorgonzola dipping sauce that’s to die for! This was followed up with one of the best looking (and tasting) salads we have ever tried! It’s meant to be split between two or three people, or you can take some to go for a snack later on.

We were having so much fun indulging and all the while pacing ourselves for the main course, PIZZA!

First off, of all the pizzas we tried none had pepperoni or red sauce. The funny thing is that we didn’t even miss that. Yes they have traditional pizzas, but we highly recommend being a bit adventurous when ordering. Pro Tip: Try half & half pies in order to experience more options! We sampled five, yes FIVE!, pies and loved ALL of them! Here is the breakdown:

The first pie we tried was half Steak & Mushroom and half Chicken Gouda! 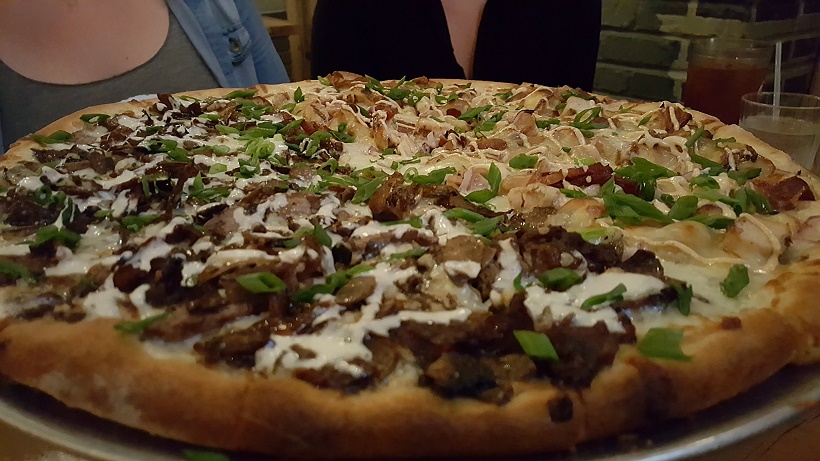 Next up was a pie that was half Cuban Pork and half Mozzarella Caprese. 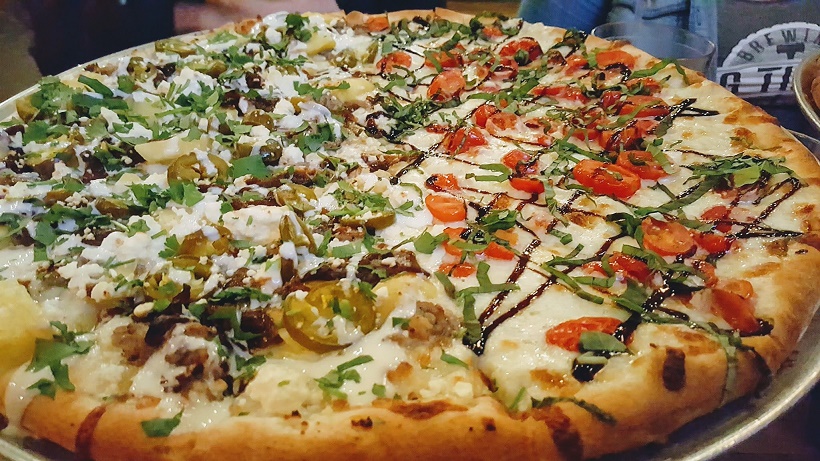 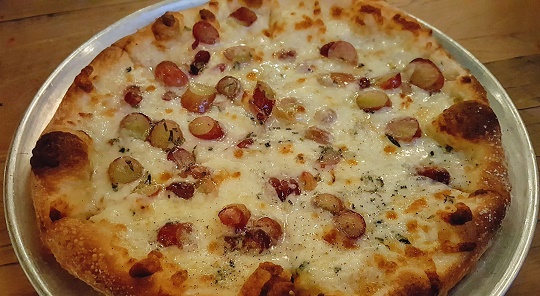 One of our favorites was a unique pie to say the least. The Grape & Gorgonzola pizza. Yep, you read that right. Grapes on a pizza! It was a surprisingly delicious combination of red grapes, gorgonzola & fresh rosemary. This one is a MUST TRY!

At this point we were in pizza heaven and dangerously close to a food coma, but we weren’t done yet. There was still dessert! We sampled the New York style Cheesecake with raspberry sauce and the Chocolate Peanut Butter Brownie Terrine made by alternating layers of brownie & peanut butter then covered with chocolate ganache! Be warned, it is super rich and very addictive! 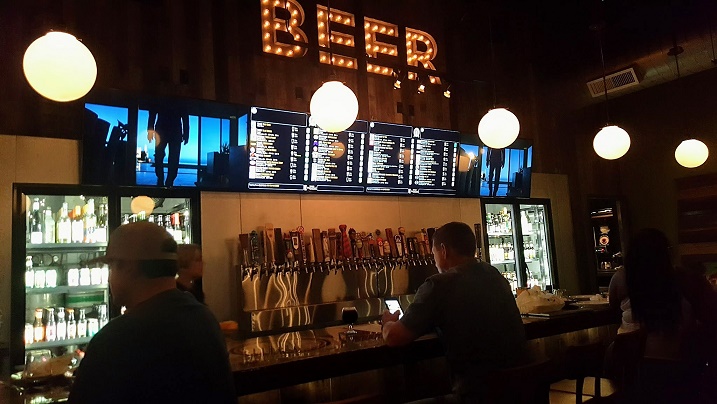 In addition to the amazing food, Pies & Pints offers a variety of local beers and has a daily happy hour from 3pm-6pm that includes $1 off craft beers and $2 off those amazing starters we mentioned earlier! Do yourself a favor, Birmingham, and stop by to try a few of these amazing pizzas and enjoy a brew or two. We have no doubt that you will love the atmosphere and unique selection of pizzas. We were already texting friends and planning our next visit before we had even finished eating!

Ron Pope: A “Drop in the Ocean” is Still Making Waves